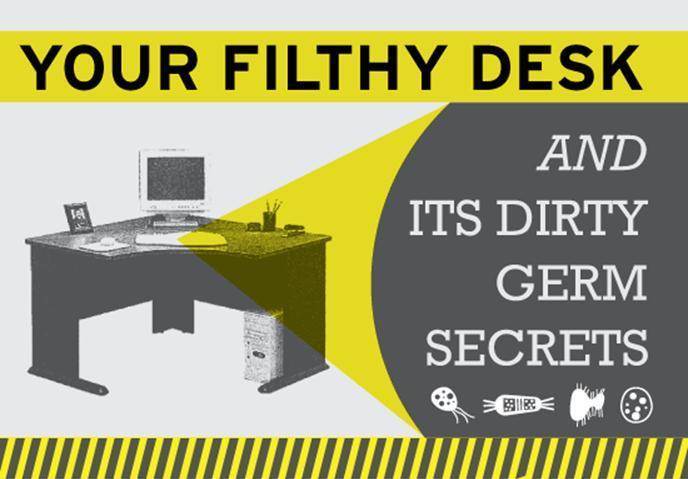 If you’re like me, you spend a tremendous amount of time at your desk everyday. Did you know your desk collects 400 times more bacteria than your toilet seat? There is an average of 21,000 germs per square inch living on your desk alone. Yikes and yuck!

I’m not here to gross you out.  Consider this a bit of motherly advice or a reminder to you and your office staff on how to stay healthy and productive. According to Forbes, U.S. workforce illness costs $576B annually from sick days to workers compensation.

Germs pass around your office like a game of hot potato.  Germs thrive on human touch.  According to University of Arizona germ guru Dr. Charles Gerba, the most germ-contaminated spots in the office are:

Surprisingly, women were found to have three to four times the number of bacteria in, on and around their desks, phones, computers, keyboards, drawers and personal items than men.

“I thought for sure men would be germier,” Gerba said. “But women have more interactions with small children and keep more food in their desks.”

Another surprising statistic is how many of us eat at our desks. According to the American Dietetic Association and ConAgra Foods Home Food Safety program survey,

Not surprising, given that women were found to be “germier”, 60 percent of women ate regularly at their desks as opposed to 42 percent of men.

It may seem like basic training but how do you keep your desk, phone, keyboard and computer germ free?

With 80 percent of infectious diseases transmitted through touch, hands are the number one vector of colds and flus. Some studies put the number of times workers touch their faces at once every four minutes. Between sanitizing hands and limiting luxurious eye rubs, workers will likely cut their sick days by half.

According to Gerba, people who reported using a disinfectant had 25 percent fewer bacteria in their offices than those who didn’t.

How about the office refrigerator?

Moldy sandwiches, condiments that expired in 2005, and a petrified carton of half-and-half that nobody will touch—office refrigerators can get out of control fast. Foods that are most likely to make your office fridge smell and look like the town dump are casseroles, cold cuts, poultry, sour cream and yogurt.

I used to work with this gal named Carol. Every month or so she took it upon herself to send out a company-wide email reminder that went something like this….

The office refrigerator needs your immediate attention. If you have any leftovers, tupperware or paper bags in the refrigerator, now is the time to remove them. Any items left in the fridge on Friday will be tossed without further examination.

Signed, I am not your Mother but someone sure needs to remind you!

Carol was not happy with her role of “office cop” but her reminders made an impression and reminded us to be better corporate citizens. It’s impossible to avoid germs entirely, but according to Brad Reynolds of Kimberly-Clark Professional’sHealthy WorkplaceProject, diligent washing, wiping and sanitizing can help office workers reduce their rates of cold, flu and stomach illness by up to 80%. In the long run, I wonder how many dollars Carol saved us in employee illness and absenteeism.

If you have a Carol in your office or would like to add your advice, please share below. If you like this post, you may enjoy another office productivity tip: 7 tips for start-ups and SMBs moving from desktop to a cloud-based accounting software