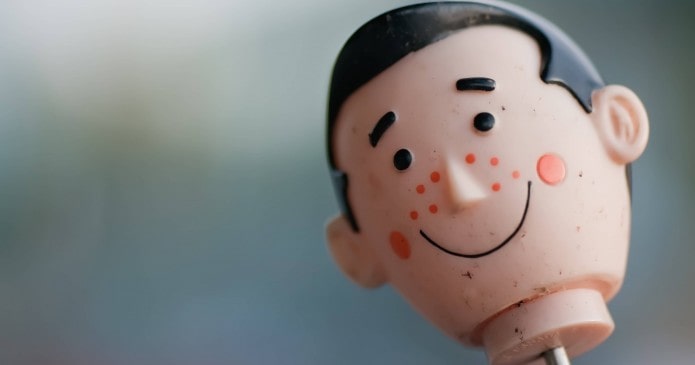 Welcome to the new digital age – an era of hybrid communication where we revert to the ancient use of pictographs as written language.

This new world is the world of the email emoji.

From NPR, the story of the emoji starts in Japan in the mid-1990s.

Back then, pagers were all the rage with teenagers. The ability to send an image of a cartoon heart was one of the unique features on DoCoMo pagers. That’s widely believed to be the first instance of an emoji.

Apple included the first official emoji keyboard in iOS 5 and emojis were standardized by the Unicode consortium as part of Unicode 6.0.

Since then, email emoji usage has exploded (image from Instagram): 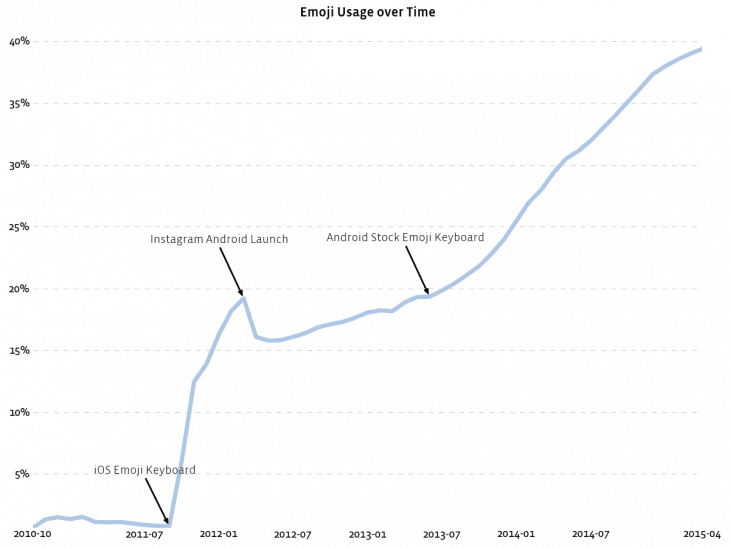 Emojis and Emoticons are NOT the Same Thing

Before we dive further into the benefits of using emojis in social media or an email emoji for your marketing campaigns, it’s important to point out that emojis and emoticons are not the same thing.

Being somewhat green myself, I thought they were interchangeable.

To avoid further confusion, here are their definitions:

An emoticon is a short sequence of keyboard letters and symbols, usually emulating a facial expression that complements a text message. Here are some examples:

The word emoji means “picture letter” in Japanese. Each character has an official name, defined as part of the Unicode standard. The encyclopedia of emojis called Emojipedia exists to add more context to each emoji character than can be provided by the official Unicode name. Find out what is this emoji by entering an emoji character or name into the search field.

For a complete list of all emojis, start with your platform preference:

And the latest addition to the email emoji hot list: 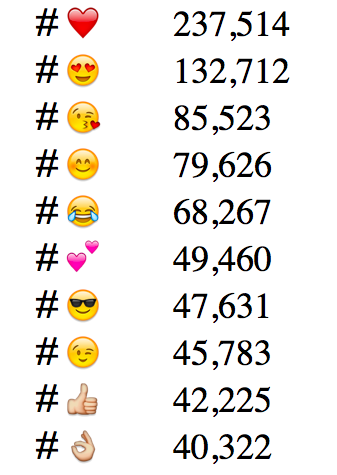 Smile, Wink, Pray: How to Use Emojis in Social Media

According to a Business Insider Intelligence report, characters now make up 40 percent of messaging on networks like Instagram and Twitter. As part of your social media marketing plan, here are a couple of ways to test the use of emojis:

Can Use of an Email Emoji Open Email – Hum?

Mycleveragency.com tested the question, “Can emojis open an email?”

Earlier this year, MailChimp announced support for emojis in subject lines. The MailChimp data shows thousands of marketers running email campaigns are including emojis in their subject headings. Here is a chart listing the top 15:

MailChimp warns us that not all email clients support all symbols. Whether your target audience wants to see an emoji in your subject line or not, they’re less likely to engage with any that look like this:

From Can Using an Emoji Help Open an Email?:

1. Like most social media marketing tactics, understand you target audience.

2. Test thoroughly to see how your intended emoticon will appear across the popular email clients. See “A warning” above.

3. Watch your tone-of-voice. If you’re working B2B, with a serious brand message, perhaps a smiley face isn’t right for that email.

5. Use the icon early to make sure it shows up in the preview.

What do you think of using an email emoji?

Previous
7 Ways to Boost Social Media and Blog Traffic with dlvr.it
Next
Take a Break: How to Prepare Your Blog for Vacation