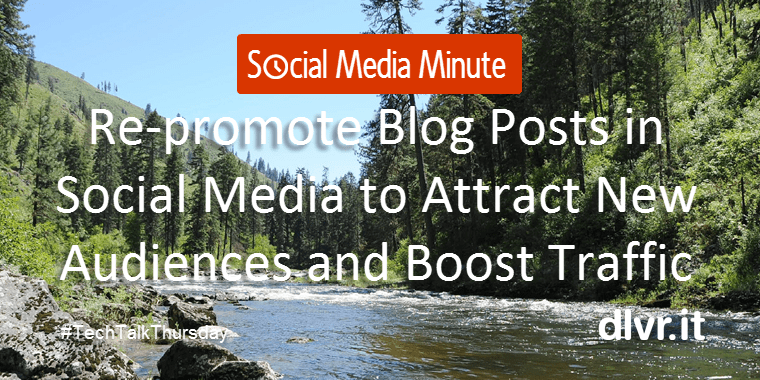 (#TechTipThursday) When I was a kid, one of my favorite things to do in the summer was to go fishing. I would hop on my bike with my rod and a small tackle box and ride to the local fishing spot. My ‘secret’ area was under a bridge in a fast moving stream that was created by a man-made waterfall. A mill once stood upstream and was powered by the water coming over the waterfall. As I sat there, I would observe people coming and going. I am sure, like me, each had their favorite spot on the river. One thing we all did was stare endlessly watching the water move by. It was so clear you could see the fish. Over the years, I learned the patterns of the river. I knew I had to be under the bridge in the early part of the day. I would move around the river depending upon the time of day and the type of fish I wanted to catch.

Social Media is much like a fast moving river. We are trying to catch the attention of our audience as they swim by. We are competing with the other fisherman along the shore. We see that we have fans and followers in the clear water. They swim around looking for the tastiest bait. Like the river, the social media stream constantly changes as new content pushes down the old, fishermen come and go, and we learn the times of day when the fish are most active.

Think about the life of a fisherman and how that relates to social media reach and increasing blog traffic. You created a great blog post. You tossed it into the social media river. Is it the right time to be fishing? Are you using the right bait for the type of fish you want to attract? Do the fishermen upriver have better gear?

Toss your blog posts back in the water several times during the first 10 days after publishing it to increase blog traffic. The social media river constantly changes. The fish constantly move around. Don’t give up. Try the following:

Have the Right Tools in your Tackle Box

As any good fisherman knows, you have to have the right gear in your tackle box. In my tackle box is Q. Queue allows me to create several new headlines, try different hashtags and schedule blog posts throughout the day or over a period of time. Once a blog post is live, I use the dlvr.it button in my browser to start the one-click rescheduling process.

Step 1. Add the blog post to Q with the dlvr.it button.

Step 2. Create a new headline, add different hashtags and include a new image

Step 3. Calendar the blog post according to a re-posting schedule (see ours below)

We try to adhere to following re-posting schedule:

If our Q social media data and/or Google stats don’t show improved blog traffic after a few attempts during the first week, we’ll evaluate scheduling the blog post for further re-publishing. During this process, a quality piece of evergreen content may emerge. We’ll re-promote the content as long as it continues to deliver blog traffic.

Now it’s your turn. Re-promote your most recent blog post. Throw it back in the water and see if it boosts blog traffic. It only takes a second! I will leave you with these words of wisdom, “Good things come to those who bait.”