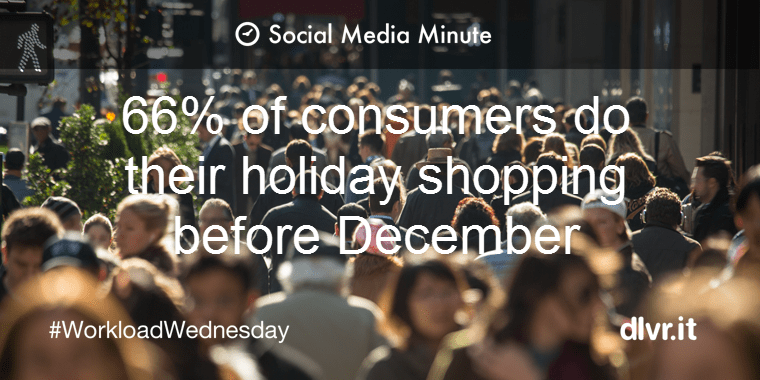 Summary: Find out what Boxing Day, Singles Day and social media have in common with U.S. holiday shopping days.  As a bonus, we’ve added some great easy to implement Facebook promotions to capitalize on the world’s holiday spending.

(#WorkloadWednesday) Anyone in retail will tell you there is no rest for the weary, especially in the final quarter of the year. Given the limitations on your time and energy during the holiday season, you need to focus your social media strategy on certain key dates.

From a marketing point of view, what are the key “retail shopping” dates? Twenty years ago, the U.S. shopping date list was relatively short. The season started the day after Thanksgiving and ended Christmas Eve. Following Christmas, you could expect shopping chaos until shortly after the New Year.

Now, both the length of the season and the number of important shopping dates has expanded, with the addition of such artificial dates as Black Friday, often regarded as the beginning of the holiday shopping season and Cyber Monday, created by marketing companies to persuade people to shop online. Given the international nature of the cyber market, this is what your short list of shopping dates includes in 2014:

What is Biggest Day Ever for Online Retailers in the UK?

Boxing Day is traditionally the day following Christmas Day, when servants and tradesmen would receive gifts, known as a “Christmas box”, from their bosses or employers. In the UK, Canada, and some Australian states, Boxing Day is primarily considered a shopping holiday, much like Black Friday in the U.S.

What is the World’s Biggest Shopping Day?

Let’s go a little more global. What is the world’s biggest shopping day touting sales near $6 billion USD last year? Care to guess? According to an article by Forbes, it is Singles Day, November 11, sometimes referred to as 11/11 or one-one-one-one.

“Fueled by Alibaba, the enormous, publicly-held, online marketplace, it’s the biggest shopping day of the year. Bigger than Black Friday. Bigger than Cyber Monday. It is the day when single people in China and the rest of Asia are out shopping in full force. That’s an estimated 270 million shoppers whose sales “obliterated” last year’s Cyber Monday. Although the numbers are not in yet, this year’s Singles Day online shopping bonanza is likely to break all the records set in 2013. If Alibaba can keep its pace, it may do more than $8 billion USD in sales in 24 hours.”

Why Should You Care About Boxing Day or Singles Day?

As a small business, with limited time and money, do you care about Boxing Day or Singles Day? You should consider it! They are unique here in the U.S. and an excellent way to educate your audience. Here is one easy to implement idea from Forbes to promote your business and spread holiday cheer via social media at the same time:

Do the same for Boxing Day.

What is Small Business Saturday?

This year, the National Retail Federation will be tracking Small Business Saturday for the first time and expects the sales numbers to be significant — more than 95 percent of retailers are small businesses operating a single location. In fact, a survey conducted on behalf of the National Federation of Independent Businesses and American Express identified that $5.7 billion was spent by consumers aware of the initiative on Small Business Saturday in 2013 alone.

How do you encourage more customers to shop with you on Small Business Saturday? Although a little late to implement this year, here’s a great example of a 5-week promotional plan for Facebook from Constant Contact. Bookmark, print and save for next year.

Phew! I’m tired already. Now you know what key shopping dates need to be on your radar. What do you plan to do next? Get an early start!

Now it’s your turn. We’d love to hear from you! Do you know much about the origin of Singles Day? What are your social media plans for the holidays?