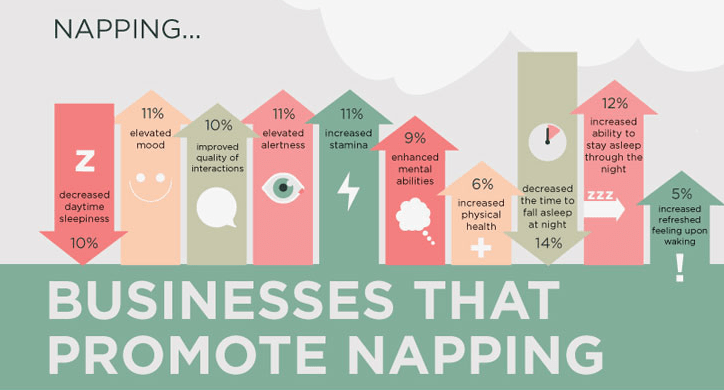 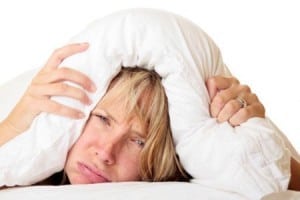 Eighty-three percent of Americans do not get a good night’s sleep.

Those who study sleep patterns have found the main causes of this sleep deprivation epidemic to be stress, anxiety and pain.  Those are certainly my top three reasons for a restless night along with being woken by my scratching cat that wants to be let out for a three a.m. stroll. Other, less prevalent, reasons include the inability to turn off thoughts (a symptom of anxiety), being overtired, background noise, children and, alarmingly, difficulty breathing.

Sleep deprivation is now costing U.S. companies $63.2 billion a year in lost productivity. Exhaustion makes employees less efficient, even in performing simple tasks such as reading email. Additionally, they have a negative influence on the work environment, as they are also generally more irritable and more likely to explode.

One simple fix: Institute an OK to nap policy in your workplace

Google, Nike and the Huffington Post do it.  Historical figures such as Leonardo da Vinci, Napoleon Bonaparte and Thomas Edison napped as well. There must be a good reason they are such strong advocates of napping and consider it a workplace necessity, not just a perk.

It is not a badge of honor to work under the stress of sleep deprivation. My husband has been touting the benefits of a mid-day nap for years. He would just close his office door and turn off the lights – pretend he was not home.  If he could, I’m sure he would have installed a couch and put out a do not disturb sign on his door. Napping did not affect his productivity but was an issue for his troglodyte boss, who, himself, dozed off during afternoon meetings. Here’s an interesting “would you rather game” for managers:

Mr. Boss, would you rather have,

(a)  An employee who is alert, has quicker cognitive memory processing, thinks creatively and lower than average blood pressure, or

(b)  An employee who is lethargic, slow to grasp facts, places and people, makes frequent errors and under a higher amount of stress

I would hope most would pick employee A.  It is scientifically proven that napping offers many workplace and home benefits for healthy adults, including:

For optimal benefits, how long should you nap?

I, unfortunately, find it very difficult to nap during the day.  I wake up wishing to go back to sleep for the rest of the day (indeed, not good for productivity).  It turns out, though; I may need to time my nap for optimal benefits. The timing of a perfect nap is a mix of art and science.

For a quick boost of alertness, experts say a 10-to-20-minute power nap is adequate for getting back to work in a pinch.

Interesting fact: A telltale sign of being very sleep-deprived, is dreaming during a short nap.

A study, by Ryan Brindle and Sarah Conklin, from Allegheny College in Pennsylvania, found that those participants who slept for at least 45 minutes during the day had lower average blood pressure after psychological stress than those who did not nap.

For cognitive memory processing, a 60-minute nap may do more good. Including slow-wave sleep helps with remembering facts, places and faces. The downside: some grogginess upon waking.

Finally, the 90-minute nap will likely involve a full cycle of sleep, which aids creativity and emotional and procedural memory, such as learning how to ride a bike. Waking up after REM sleep usually means a minimal amount of sleep inertia.

A couple additional Tricks and Tips:

Napping is not just a perk; it is essential!  Do you nap at work?

Previous
Brought Up to be an Entrepreneur: Early Life on the Family Farm
Next
What’s the Connection Between a Productive Meeting, REM Sleep and Attention Span?